On December 15, 2013 the United States Representative for Oklahoma’s 1st congressional district, Congressman Jim Bridenstine visited the Azerbaijan Center in Houston, Texas and met with local cultural activists and volunteers. The newly elected Congressman spoke about his recent visit to Azerbaijan and expressed interest in growing Azerbaijani diaspora, placing emphasis on aligning Azerbaijan and United States on issues of international security and economic development in Caucasus region.

One of the topics discussed in the meeting was strengthening both cultural and economic ties between two countries and forming strategic partnerships that will ensure reaching common goals of United States, as well as Azerbaijan. Azerbaijanis present at this meeting were mainly U.S. educated young professionals that are currently working with U.S. and taking part in various cultural initiatives to promote Azerbaijan culture in America. 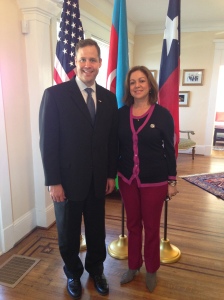 It was noted that the level of cultural and business exchange has increased in the last decade as a result of increased presence of western energy corporations opening offices in Baku, Azerbaijan as well as increased number of Azerbaijanis obtaining graduate education in Europe and the United States of America.

Overall, the meeting was held in a friendly atmosphere, concluding with various future plans for cooperation between Congressman’s office and Houston-Baku Sister Cities Association.

The Annual Thanksgiving Potluck event was hosted by the Azerbaijan Center in Houston, Texas on November 30th, 2013.

One of our biggest community events of the year, the Annual Thanksgiving Potluck Feast is where old friends and new neighbors gather together and enjoy a traditional Thanksgiving dinner with all the fixings as well as good music and dancing.Guests brought turkey, salads, sides and deserts inspired by their own family traditions.

“Thanksgiving Day is a time of festivity, family meals and reunions in America. It is also a time to show your gratitude and respect to your elders, friends, your siblings and also your colleagues; therefore, I am happy to host such event at the Azerbaijan Center”, said Irada Akhoundova, president of Houston-Baku Sister City Association and Azerbaijan Center.