Skip to primary content
Skip to secondary content
On October 26th, 2013 Azerbaijan Center hosted annual Halloween Party for Azerbaijani community in Houston, TX.
Prizes for the best carved pumpkin, best, scariest and most unusual costumes, and much more were given away to the winners.

On September 25, an Istanbul-based Caspian Strategy Institute (HASEN) held the Caspian Forum, dedicated to the Southern Corridor and energy security of Europe at a famous Waldorf Astoria Hotel in Manhattan, New York. Among the dignitaries attending the forum were members of diplomatic corps, business communities, think-tanks and representatives of various governments.

A pre-event reception was hosted by HASEN. The event, sponsored by SOCAR and TANAP, co-sponsored by BP, TP, TAP, Total, Botas, consisted of two parts.

The first part included speeches by government officials and business leaders. The second part consisted of a panel moderated by the Emmy-award winning TV anchor, Charlie Rose and included a panel discussion on energy security by foreign ministers of Azerbaijan, Turkey, Georgia, Greece, Special Envoys and Representatives for U.S. and EU. All range of issues, including the benefits and risks to Southern Corridor, as well as future potential projects were discussed. A grand dinner reception followed the event.

The opening remarks were delivered by the Secretary General of the Caspian Strategy Institute Haldun Yavash. The first speaker who took the podium was Vice President of State Oil Company of Azerbaijan Republic (SOCAR) for Investments and Marketing Elshad Nassirov who gave an overview of the history of the oil and gas production in Azerbaijan. The SOCAR representative noted that the first oil well in the world was drilled in Baku in 1848, the first pipeline was laid from Baku to Batumi, and that Baku provided 80% of Soviet production during the WWII, which in turn, significantly contributed to the Allied victory over Nazis. 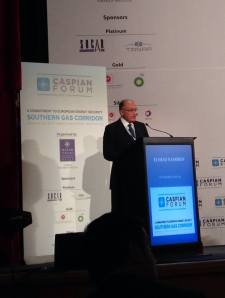 Mr. Nassirov underlined the fact that the first global oil crisis took place not in sixties or seventies, but in 1920, when Bolsheviks seized the Baku oilfields. Reiterating the importance of energy resources of Azerbaijan, the Vice President of SOCAR spoke of significance of the Southern Corridor. Concluding his remarks, Mr. Nassirov stated that after recent signing of gas deals with the European companies, participating countries got even closer to the physical construction of the pipeline.