Local Azerbaijanis and Houstonians join to remember the events of 20 January 1990.

On Sunday, January 20, 2013, the Azerbaijan Community and Cultural Center in cooperation with the Houston Baku Sister City Association, hosted an open house in commemoration of those who lost their lives during the attacks against Azerbaijan’s capital Baku before the country officially gained its independence in 1991.

On 20 January 1990, military forces of the Soviet Union, under orders issued by a decree signed by then President Mikhail Gorbachev, launched an offensive attack against the city of Baku in an attempt to impose emergency rule and seize military control.

In a sign of solidarity, the people of Baku resisted peacefully against the occupying forces, and three days after the initial invasion, Soviet forces withdrew.  Despite the peaceful resistance against the invading forces, over 100 people were killed or injured, and as a result, 20 January, or Black January, is the official observance of those who lost their lives that day.

The commemoration of Black January was opened with a slide show created by Elkhan Agamirza and Yusif Aleskerov, a local expert of the events that took place in Baku on that fateful day.  In addition to the guest lecture, a brief question and answer session took place followed by eyewitness statements from those who were present that day.

Immediately following the statements issued by eye witnesses, a moment of silence was held in memory of those who died that day. Co-founder of the US Azerbaijani Network Yusif Babanly also gave a brief history of the events that caused the 20th of January invasion and it’s implication of Azerbaijan’s quest for independence.

A moment of silence in memory of the deceased.

In addition to the guest lecture, the Azerbaijan Community and Cultural Center’s doors were open to the whole community, and we were grateful to be joined by members of the Avondale Society who took time out of their weekend to visit and partake not only in this educational lecture, but also the delicious homemade finger foods and teas that were served by our gracious volunteers. 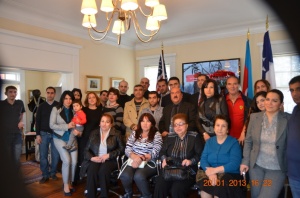 A group photograph of those who joined the commemoration and open house.