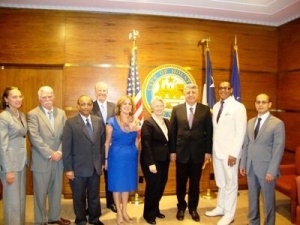 September 2011  – The Houston-Baku Sister City Association hosted a visit from a delegation from SOCAR, the State Oil Company of the Azerbaijan Republic from our sister city Baku.  Various social gatherings were held with members of the HBSCA community and during meetings with City Officials some exciting ideas for further strengthening the friendship between Houston and Baku were discussed.  Work in progress, hopefully more news in the near future.